Camden, N.J. – Americans need their chocolate fix – even more in a pandemic – and it’s the South Jersey Port’s mission to help satisfy it.

On December 16, the annual flow of high-quality cocoa beans from West Africa will begin a month early when 215,000 sacks of cocoa beans are off-loaded at the Joseph A. Balzano Marine Terminal in Camden from the ship “Four Diamonds.”

The cocoa bean business means more jobs. In addition to the scores of full-time terminal workers, hundreds of local day-laborers are hired throughout the season to sort, store, and handle millions of sacks of cocoa beans for final processing by major confectionary companies including chocolate giants: Hershey, Mars, and Blommer.

Last year,  two million burlap bags (40,000 tons) of cocoa beans were slung off ships by DRS stevedores, onto SJPC’s patented trolleys, and hauled immediately by Champion Trucking into the CICT warehouse across the street from the Balzano Terminal.

“Our process at South Jersey Port is far more efficient than containerized beans,” Jeff Wheeler, president of CICT explained. “We eliminate that additional step of loading and unloading millions of bags of beans from containers – both here and at the source.”

“It is a seamless team effort from ship to warehouse honed over 20 years of expert experience to deliver every bean,” added Robert Palaima of Delaware River Stevedores.

“It’s the hardest work on the waterfront,” Wheeler added. “We’ll be offloading 215,000 bags from the ‘Four Diamonds.’ Each bag weighs 150 pounds! Our people don’t shy away from it. They’ve developed the skills that make our terminal the most efficient handler of chocolate gold.”

“For most of our day-labor crews, it’s a family affair: fathers and sons, aunts and nieces, brother and sister, uncles and nephews. And they’re getting a nice payday before Christmas. We’re all excited when the ship comes in!”

The 14,000 tons of beans brought in by the “Four Diamonds” is the first installment on what is hoped to be a rebounding cocoa bean import business that was damaged last year by market effects of COVID-19.

Chocolate is an impulse buy and perfecting the balance of supply and demand has been extraordinarily complex as confectionary companies realign their marketing strategies from brick and mortar stores to digital in order to energize sales.

“We believe we’re going to see a significant rebound in chocolate demand, especially as vaccines against COVID come online,” said Wheeler. “Cocoa bean inventories in the U.S. are comparatively low, need to be replenished and, as consumption ticks up, so will the need for more imports.”

The West African import season runs through April and is followed by months of imports of cocoa beans from evolving Central American growers. 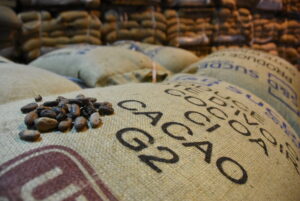 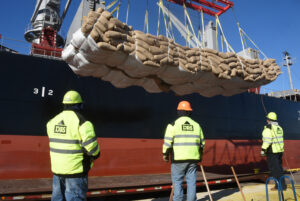